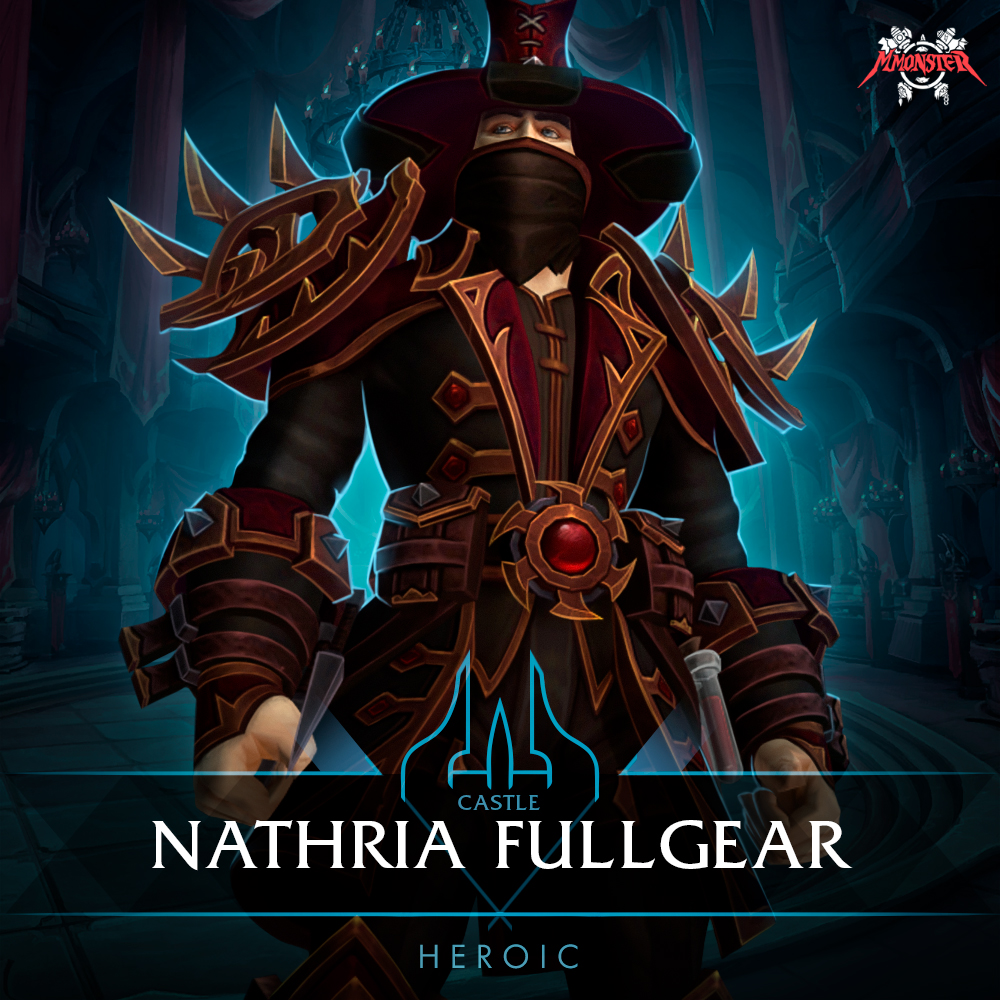 astle Nathria is a gothic castle with high spiers and towers located in the heart of Revendreth where its ruler, Sire Denathrius, reside. Castle Nathria is the first Shadowlands raid where players will join Prince Renathal's forces to face 10 powerful bosses and remove from power their venthyr master betrayer Denathrius. Castle Nathria heroic raid is released on December 8 in US region and on December 9 in EU region, in 2 weeks after new Shadowlands expansion hits live servers on November 24. The raid is available in 4 difficulty modes: LFR, Normal, Heroic and Mythic and consists of 4 wings with mostly linear structure, but you will have to kill several bosses on different steps to move further into the raid. Join this epic adventure alongside with our best boosting guilds, be the one of the first to get Castle Nathria Heroic Full Gear and have the best gaming experience and pastime you have ever had!

astle Nathria raid on Heroic difficulty drops 213 item level gear (220 item level from two last bosses) with vampire themed weapons and armor as loot rewards for killing bosses. There is also new weekly Great Vault feature introduced with Shadowlands release which is an upgraded version of previous Weekly Chest, but this time you can get your guaranteed weekly reward for killing bosses in Castle Nathria Heroic raid of the same 213/220 item level dropped from Castle Nathria heroic raid (you will need to kill 2 last bosses in Heroic raid for a chance of 220 item level item to appear). You can also unlock additional items (up to 3) to choose from by killing more bosses in a raid, greatly increasing chances of getting missing items and finishing full gear service even faster. With our Castle Nathria Heroic Full Gear service you will be killing all 10/10 bosses several weeks in a row, so all 3 items will be unlocked for your character to choose from at the Great Vault. Gear is the single most important thing in World of Warcraft game. Who owns the best gear - owns the game, and that's the reason why we offer Castle Nathria Heroic fullgear service as one of the most relevant and important boost services for any wow player. Castle Nathria heroic raid gear will benefit your character during the whole Shadowlands Season 1 up until the new raiding content release. So what are you waiting for? Get yourCastle Nathria Heroic Full Gear Boost today and watch your character collects the best raiding gear and tremendously grows in power!

ven if you are an experienced player with the best pre-raid gear, Castle Nathria heroic raid will still be a tough challenge for you. However, the rewards you will get for completing it are really high: along with the best 213 / 220 item level full raiding gear with top stats, which can also be socketed powering up your character even more, you will get Ahead of the Curve: Sire Denathrius  Feats of Strength achievement by killing Sire Denathrius Heroic last boss, chance to obtain Conduits for your Covenant Soulbinds customization, Memory of the Runecarver recipes to unlock Legendary Powers in Runecarver's Chamber, chance to obtain Portable Pocket Dimension 32 Slot Bag and much more. There are no special requirements to buy Castle Nathria Heroic boost other than 60 level of your character (you can order Shadowlands Power Leveling Boost at our store). You can buy Castle Nathria Heroic Full Gear boost with account sharing or selfplay. Our professional and trusted Mmonster players will kindly boost your character with this World of Warcraft (WOW) Castle Nathria Heroic Fullgear boosting carry service really fast so lean back and enjoy rewards.

uy Castle Nathria Full Gear from new Castle Nathria Heroic raid from the safest and most reliable boosting services on both EU and US regions, join the most epic raid in WoW Shadowlands and collect the best raiding gear in this expansion in no time! After you buy Castle Nathria Heroic Full Gear service from MmonsteR, your character will be taken to our raids every week until he is geared into full Castle Nathria heroic 213+ item level items in each slot as the final result. Account Sharing option is your best bet if you just want to save your time, especially for Heroic raids during first weeks after raid's release and selfplay option is always available for you also if you want to participate in Castle Nathria Heroic raid and get the most epic gaming experience yourself. MmonsteR boosting store is also ready to provide you with cheap Castle Heroic full gear boost for sale running multiple raids per day so you can pick a date and time of your heroic Castle Nathria raid carry! Just save yourself lots of time and skip unwanted boring wipes by using our Castle Nathria full gear boosting service with our professional and skilled players.

btaining full Castle Nathria Heroic Full Gear set of 213+ item level items certainly will make your character stronger, more effective and feel superior than anyone around. But if you want to be sure that you’re getting the maximum amount of loot from Castle Nathria Heroic raids during the full gear service or want to get absolutely Best in Slot items in the game, you should select our special options and get the real lootfall for your character with the help of additional players who will trade you all loot they get and eligible to trade. You can fasten the full gear farm boost by choosing Extra Fast Gear option so we will assign additional players of the same loot type in every heroic raid who will trade you all loot they get and eligible to trade significantly reducing time of completion. And to equip your character with the best in-game raiding gear available, just select BIS (Best in Slot) gear option to be sure to get your character absolutely best heroic gear set available becoming powerful machine of death crushing your opponents in both PvE and PvP. Please keep in mind that loot traders are not available during the opening raid weeks. Also, don't forget to loot your weekly rewards from the Great Vault every week and pick the remaining item to gear your character even more efficiently and collect your full/BiS gear even faster! And if you are already geared your character in full 213+ gear, consider our Castle Nathria Mythic Boost Run to keep upgrading your character even further.

We will collect your Castle Nathria Heroic Full Gear without guaranteed loot trade during the raids with Personal Loot by default. Most of the time, you will get 213+ ilvl items which drop personally for you and occasionally some items may be traded to you if they are not reserved by other customers in a particular raid. We will make raid runs until you get item (first one which drops) in each of 16 or 15 item slots your character has for the chosen class and spec. Estimated Delivery Time: up to 4-7 weeks (average time, highly depends on drop chance, can take 1-2 weeks extra if started with the opening weeks after raid's release).

We will collect your Castle Nathria Heroic Full Gear with guaranteed loot trade for more efficient results with the fastest speed possible. During the raids several (4+) players of the same armor type (including characters of the same class and spec) will be assigned to you and trade you 213+ ilvl loot for your character's class and spec until you get items in each of 16 or 15 item slots your character has for the chosen class and spec. Estimated Delivery Time: up to 3-5 weeks (average time, highly depends on drop chance, can take 1-2 weeks extra if started with the opening weeks after raid's release).

We will collect your Castle Nathria Heroic Best in Slot Gear with guaranteed loot trade until you get every BiS item in each of 16 or 15 item slots your character has for the chosen class and spec. During the raids several (4+) players of the same armor type (including characters of the same class and spec) will be assigned to you and trade you required 213+ Best in Slot items from the BiS list. You can provide us with your list of items, but please note that BoE items or super rare cosmetic items cannot be included in the list. Estimated Delivery Time: up to 4-7 weeks (average time, highly depends on drop chance, can take 1-2 weeks extra if started with the opening weeks after raid's release).

Things you should know and get ready to
There's one limitation with common World of Warcraft loot system in which only items with lower item level than the ones player already has in the same item slot can be traded. Despite this, we guarantee that all of your assigned players will have higher item level than the basic item level of items dropped in this raid (213) and may be able to trade you 99.9% of items they get (except first opening weeks after raid's release).