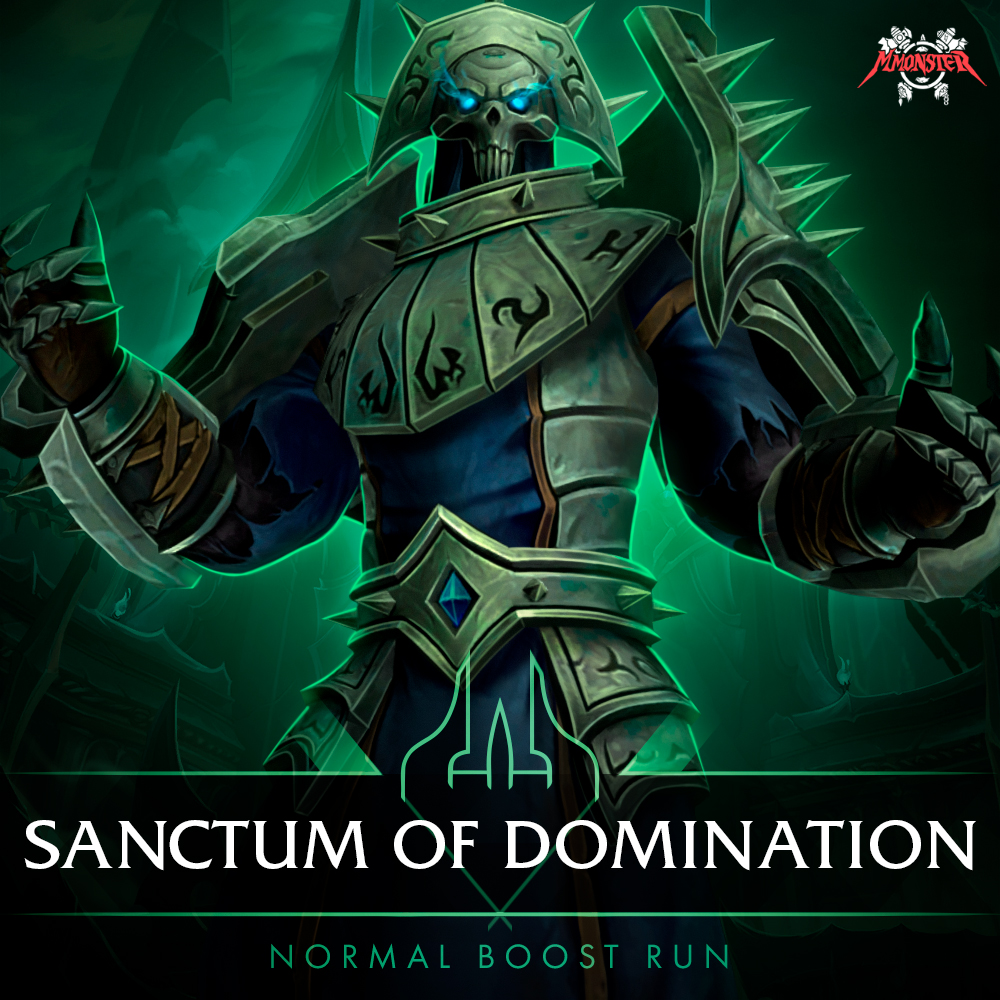 Here you can buy Sanctum of Domination Normal Boost run to get some cool 226/233 item level raiding gear and other rewards fast and easy. Please note that during the first raid weeks there may be wipes, delays and increased raid start waiting times.

anctum of Domination is a new WoW Shadowlands raid located in Torghast where players will fight Jailer's forces and face 10 powerful bosses inlucding well known characters such as The Tarragrue, Remnant of Ner'zhul, mighty Kel'Thuzad and treacherous Sylvanas Windrunner as the final encounter. Sanctum of Domination heroic raid is released on July 6 in US region and on July 7 in EU region, one week after new Chains of Dominarion patch 9.1 hits live servers on June 29. The raid is available in 4 difficulty modes: LFR, Normal, Heroic and Mythic and consists of 4 floors with linear structure. Join this epic adventure alongside with our best boosting guilds, be the one of the first to get Sanctum of Domination Normal Raid Run and have the best gaming experience and pastime you have ever had!

anctum of Domination raid on Normal difficulty drops 226 item level gear (233 item level from two last bosses) with the Maw themed weapons and armor as loot rewards for killing bosses. There is also new The Great Vault feature introduced with Shadowlands release which is an upgraded version of previous Weekly Chest, but this time you can get your guaranteed weekly reward for killing bosses in Sanctum of Domination raid. Item level of reward from the Great Vault will be equal to item level of loot dropped from Sanctum of Domination normal raid - 226/233 item level (you will need to kill 2 last bosses in Heroic raid for a chance of 233 item level item to appear). You can also unlock additional items (up to 3) to choose from by killing more bosses in a raid giving you more choice and chances to get the desired item, but still you can pick only one guaranteed weekly reward from the the Great Vault. Depending on amount of bosses killed during the week you will unlock following rewards to choose from in your Vault:

Personal Loot
Raid with Personal Loot option means that quantity of items you will get fully depends on your luck, which we wish you most of all :) You will get all 226/233 ilvl loot for your character's chosen class and spec including socketed items which may drop for you personally during the run.
Additional Loot (X Loot)
You have the opportunity to buy additional X loot in our raids to increase the quantity of needed loot you will get from the raid and to have a minimum quantity of items guaranteed (just like it was in Master Loot raids).
Loot Distribution
In case you choose additional loot option (X Loot) selected amount of players of the same armor type will be assigned to you (you will know beforehand at which group number are your assigned players) and trade you all 239/246 ilvl loot for your character's chosen class and spec. Items which drops for you personally and items, which are not an upgrade for your character, count towards minimum guarantee, however double items (2 items in a same item slot) don't. In case of a bad luck of not getting minimum guarantee we will make another loot run for your character to get remaining items next week absolutely free.
Guarantees
Number of items guaranteed depends on a loot option you choose, check out our loot table:
*information provided applies to 10/10 Sanctum of Domination Normal boost run

Bosses included in your Sanctum of Domination Normal Run depending on your selected Boost Run option:
Things you should know and get ready to
There's one limitation with common Shadowlands loot system in which only items with lower item level than the ones player already has in the same item slot can be traded. Despite this, we guarantee that all of your assigned players will have higher item level than the basic item level of items dropped in this raid (226) and will be able to trade you 99.9% of items they get. Please note that BOE items can not be traded. Minimum loot guarantee applies to 10/10 Sanctum of Domination Normal boost runs only, we can not guarantee this amount for lesser bosses runs.