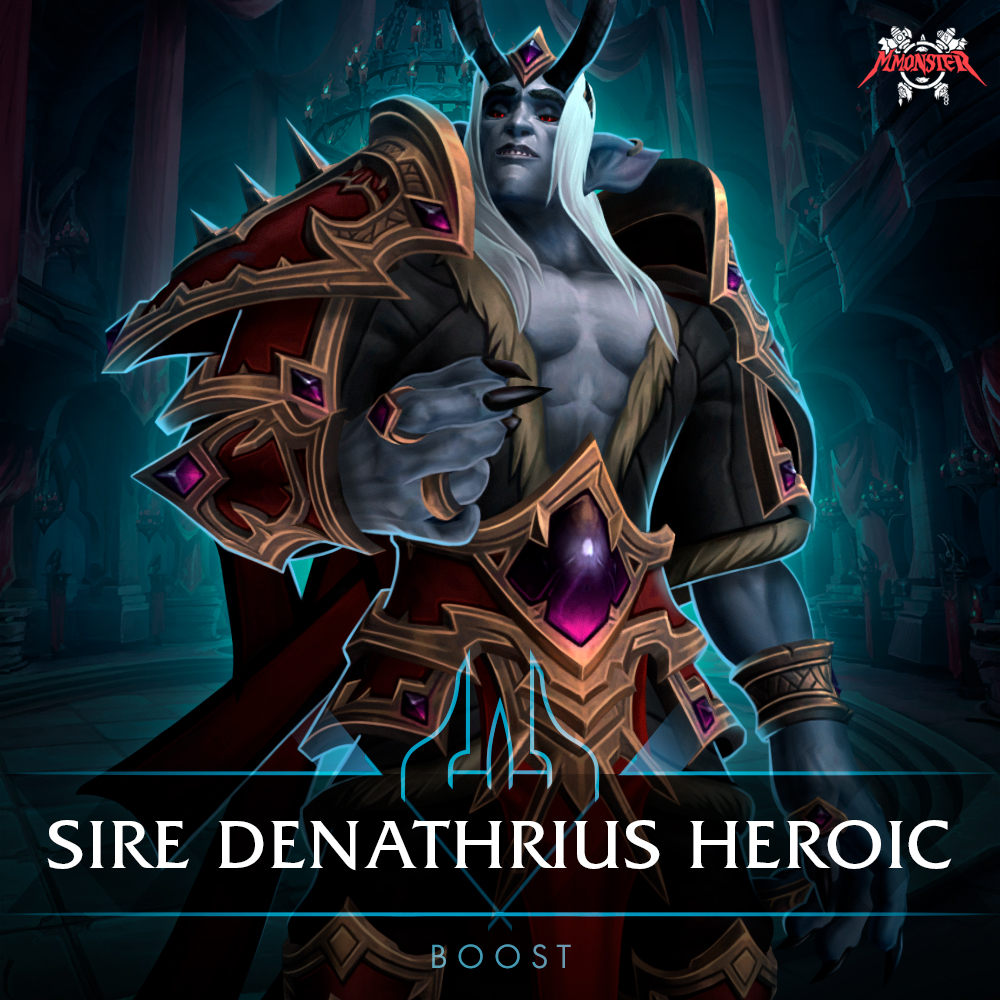 Here you can buy Sire Denathrius Heroic Boss Kill Boost to get some cool 220 item level raiding gear, Ahead of the Curve: Sire Denathrius Feats of Strength achievement and other rewards fast and easy

astle Nathria is a gothic castle with high spiers and towers located in the heart of Revendreth where its ruler, Sire Denathrius, reside. Castle Nathria is the first Shadowlands raid where players will join Prince Renathal's forces to face 10 powerful bosses and remove from power their venthyr master betrayer Denathrius. Castle Nathria heroic raid is released on December 8 in US region and on December 9 in EU region, in 2 weeks after new Shadowlands expansion hits live servers on November 24. The raid is available in 4 difficulty modes: LFR, Normal, Heroic and Mythic and consists of 4 wings with mostly linear structure, but you will have to kill several bosses on different steps to move further into the raid. Join this epic adventure alongside with our best boosting guilds, be the one of the first to get Sire Denathrius Heroic Boss Kill and have the best gaming experience and pastime you have ever had!

ire Denathrius is the last boss of Castle Nathria Raid and is a three phase encounter with a fight going on at 2 different stages! First things first, to reach Sire Denathrius heroic boss you will have to run through the whole Castle Nathria heroic raid and successfully pass 9 bosses and encounters on your way. Second, when you finally face him as the last boss of Castle Nathria raid, you will have to avoid lots of most complicated mechanics and show the highest playing skills in order to defeat him, not a trivial task for people who don't have time for long term progression and endless wipes in random raid groups. The boss on heroic difficulty has a weekly lockout and drops 220 item level gear including weapon tokens and vampire themed armor as loot reward for killing him. Our boosters are ready to help you kill Sire Denathrius Heroic Final Boss as heroic Sire Denathrius boost carry service is best choice if you need only the best 220 item level loot from the last boss and don’t want to clear the whole raid or get Ahead of the Curve achievement before it's gone when new raiding content arrives. So what are you waiting for? Get yourSire Denathrius Heroic Kill Boost today and watch your character collects this cool gear and tremendously grows in power!

ven if you are an experienced player with the best pre-raid gear, Sire Denathrius heroic boss will still be a tough challenge for you. However, the rewards you will get for completing it are really high: along with the best 220 item level raiding gear and weapon tokens with top stats, you will get Ahead of the Curve: Sire Denathrius  Feats of Strength achievement, chance to obtain Conduits for your Covenant Soulbinds customization and Memory of the Runecarver recipes to unlock Legendary Powers in Runecarver's Chamber. There are no special requirements to buy Sire Denathrius Heroic Boost other than 60 level of your character (you can order Shadowlands Power Leveling Boost at our store). However please keep note of 180+ minimum item level gear restrictions for account sharing option during the first weeks of Castle Nathria raid. You can buy Sire Denathrius Heroic kill boost with account sharing or selfplay. Our professional and trusted Mmonster players will kindly boost your character with this World of Warcraft (WOW) Sire Denathrius Heroic boosting carry service really fast so lean back and enjoy rewards.

uy Sire Denathrius Heroic Last Boss Kill from the safest and most reliable boosting services on both EU and US regions, join the most epic raiding team and defeat the most powerful boss in Castle Nathria Heroic Raid guaranteed! You will get a quick invite to Castle Nathria heroic raid group followed by a summon directly to the Sire Denathrius boss room in the very end of the Castle Nathria raid. Account Sharing option is your best bet if you just want to save your time, especially for Heroic raids during first weeks after raid's release and selfplay option is always available for you also if you want to participate in Sire Denathrius Heroic boss kill and get the most epic gaming experience yourself. You won’t have to face all the trials during the boss fight, just hit the boss, enjoy the show and grab rewards! Save yourself lots of time and skip unwanted boring wipes by using our Sire Denathrius boosting carry service with our professional and skilled players.