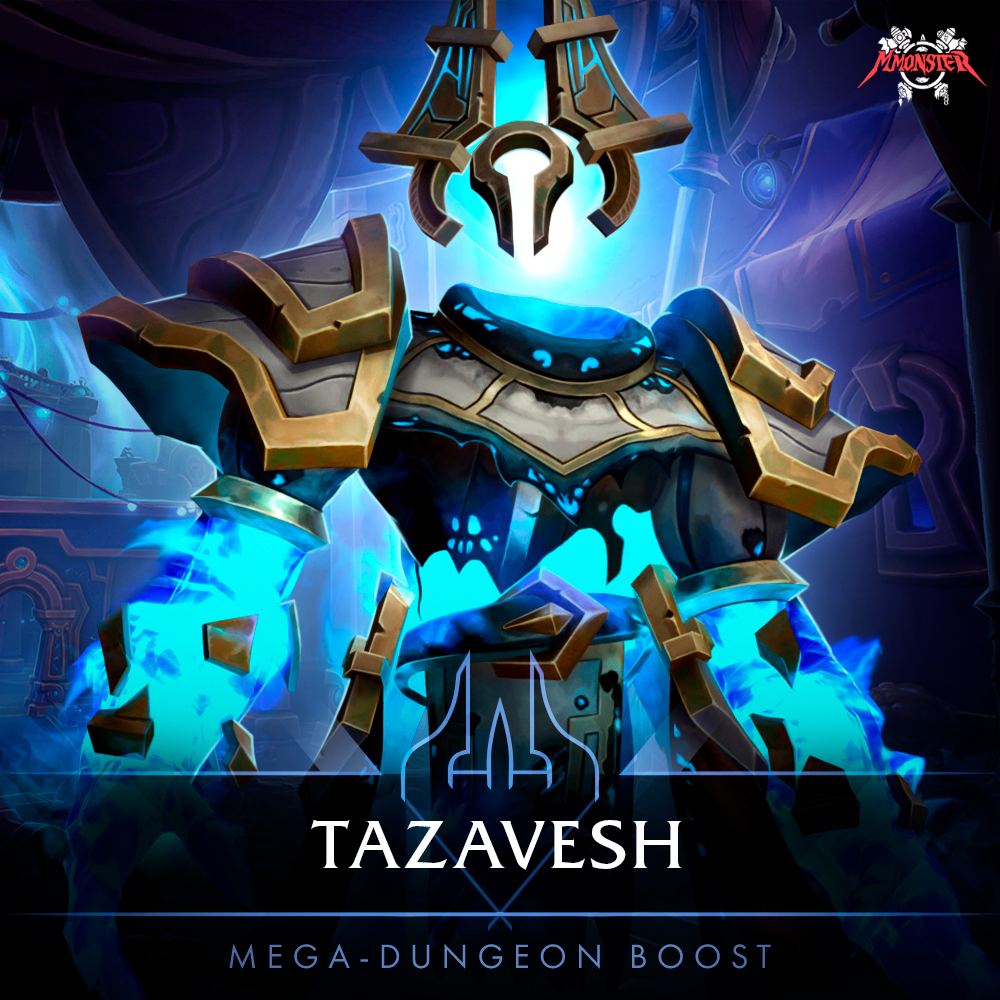 azavesh, the Veiled Market is a new WoW Shadowlands 9.1: Chains of Domination 8-boss Megadungeon located in Broker bazaar where players will explore the market, encounter new types of foes and chase after the stolen artifact. Tazavesh Dungeon is released on July 6 in US region and on July 7 in EU region, when Shadowlands Dungeon Season 2 hits live servers. The Megadungeon is Mythic only, but available in 2 difficulty modes: Normal Mode and Hard Mode, which can be activated by performing special activities and grants players special rewards for successfully completing it. Join this epic adventure alongside with our best 5-player teams, be the one of the first to get Tazavesh Megadungeon Boost Run and have the best gaming experience and pastime you have ever had!

azavesh, the Veiled Market Megadungeon on Normal Mode drops 226 item level gear with Broker themed weapons and armor as loot rewards for killing bosses. There is also Hard Mode feature available that can be activated by performng special activities at the start of dungeon and obtaining Passably-Forged Credentials item turning player into Broker. Item level of gear which drops from the Hard Mode bosses is increased to 233 item level and the gear itself marked as Priceless Mythic, making it useful for your character during the whole Shadowlands Season 2 up until the new Season release. So what are you waiting for? Get your Tazavesh Megadungeon Boost Run today and watch your character collects all this cool gear and tremendously grows in power!

ven if you are an experienced player with the best raid or dungeons gear, Tazavesh Megadungeon (especially its Hard Mode) will still be a tough challenge for you. However, the rewards you will get for completing it are really high: along with the best 226/233 item level gear with top stats, which can also be socketed powering up your character even more, you will get Tazavesh, the Veiled Market achievement by killing all 8 bosses, chance to obtain new Conduits for your Covenant Soulbinds customization, chance to obtain Cartel Master's Gearglider mount as a rare 1% drop from So'leah last boss, lots of Anima and last but not least, for completing Tazavesh Megadungeon on Hard Mode and killing last boss you will get unique Tazavesh Gearglider flying mount with Fake It 'Til You Make It achievement. There are no special requirements to buy Tazavesh Megadungeon Boost Run other than 60 level of your character (you can order Shadowlands Power Leveling Boost at our store). You can buy Tazavesh, the Veiled Market Megadungeon boost run with account sharing or selfplay. Our professional and trusted Mmonster players will kindly boost your character with this World of Warcraft (WOW) Tazavesh Dungeon boosting carry service really fast so lean back and enjoy rewards.

f you want to be sure that you’re taking out the maximum amount of loot from Tazavesh Megadungeon or want to gear your alts most quickly and efficiently, you should purchase X Loot option and get the real lootfall for your character with the help of additional players who will trade you all loot they get and eligible to trade! You will get a full-fledged Tazavesh Megadungeon lootrun with all the extra loot you can carry from our loot traders. We have lots of them prepared for you to meet any expectations and provide you with your loot satisfaction, just upgrade your Tazavesh Megadungeon boost run with Extra Loot option and you're ready to go. Please keep in mind that loot traders are not available during the first weeks of Shadowlands Season 2.

Run with Personal Loot option means that quantity of items you will get fully depends on your luck, which we wish you most of all :) You will get all 226/233 item level loot which dropped for you personally during the run.

You have the opportunity to buy additional X1 / X2 loot chance in our dungeon runs to increase the quantity of needed loot you may get during the run and to have a minimum quantity of items guaranteed.

There will be 1 player with the same armor type in your group without loot ID who will trade you all items he may get during the run. Minimum guarantee is 2 items in 2 different item slots and in case of a bad luck we will get you another run next week to get you remaining items.

There will be 2 players with the same armor type in your group without loot ID who will trade you all items they may get during the run. Minimum guarantee is 4 items in 4 different item slots and in case of a bad luck we will get you another run next week to get you remaining items.

In case you choose additional loot option (X1 / X2 Loot Chance) 1 / 2 players of the same armor type will be assigned to you and trade you all 226/233 ilvl loot they get for your character's chosen class and spec. Items, which are not an upgrade for your character, count towards minimum guarantee, however double items (2 items in a same item slot) don't. In case of a bad luck of not getting minimum guarantee we will make another loot run for your character to get remaining items next week absolutely free.

Number of items guaranteed depends on a loot option you choose, check out our loot table:

There's one limitation with common Shadowlands loot system in which only items with lower item level than the ones player already has in the same item slot can be traded. Despite this, we guarantee that all of your assigned players will have higher item level than the basic item level of items dropped in this run (226/233) and will be able to trade you 99.9% of items they get.