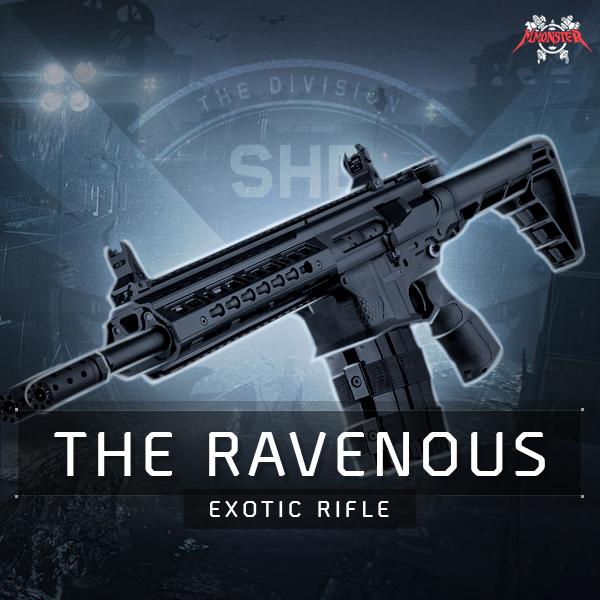 ivision 2 Exotics are a higher tier than High-End, which makes them some of the best guns in game. They are all unique named weapons and you get them through complicated tasks, such as plenty of grind and prayers to the god of random loot drop. Exotic weapons have been termed weapons which have unique abilities delegated to them Which is exactly what makes them essential for the endgame content. Despite having a general excellent stat line, Exotic Weapons could be hard to acquire. Aside from the bonus exotic weapons which arrive with special editions, you'll have to scour the map to discover the blueprints in order to craft these weapons.

he Division 2 Ravenous Double Barrel Rifle is the most recent exotic weapon being added to The Division 2 Warlords of New York with Title Update 10 and is an exclusive reward from the second Division 2 Foundry raid called Operation Iron Horse. The weapon drops from the raid's end loot chest with 10% chance or from any boss in the raid with 1% chance. The Ravenous probably has one of the most unique Talents in the game as it buffs damage and health depending on which shoulder you’re aiming over as you shoot thanks to its unique talent Geri and Freki:

How The Ravenous Exotic Rifle farm service will be carried out

fter placing the order we will contact you and The Ravenous farm boost service will be done in two different methods depending on playing method you have chosen. In case of Selfplay method, we will offer you time and date for the first raid and you will join our group by invitation right in the Division 2 game at an appointed time. We will carry you through the Operation Iron Horse raid and will trade you the Ravenous exotic weapon in case it drops from one of the bosses or in the chest at the end of the raid. In case it does not drop from the first raid we will invite you next time and appoint another raid for you and we will carry you until you will get the Ravenous guaranteed. In case of piloted run, the boost is done in the same way but the time of the runs will vary and we will inform you when we will take over your account. Our players are the best boosting team with great helpful players and our support is there to answer your questions and assist you when you need it. We make Division 2 The Ravenous farm boost on EU or US region and on any gaming platform available for the best price: PS4, Xbox and PC! Try MmonsteR boost service and you will have your in-game helper from this moment on. Safety of the boost is guaranteed!