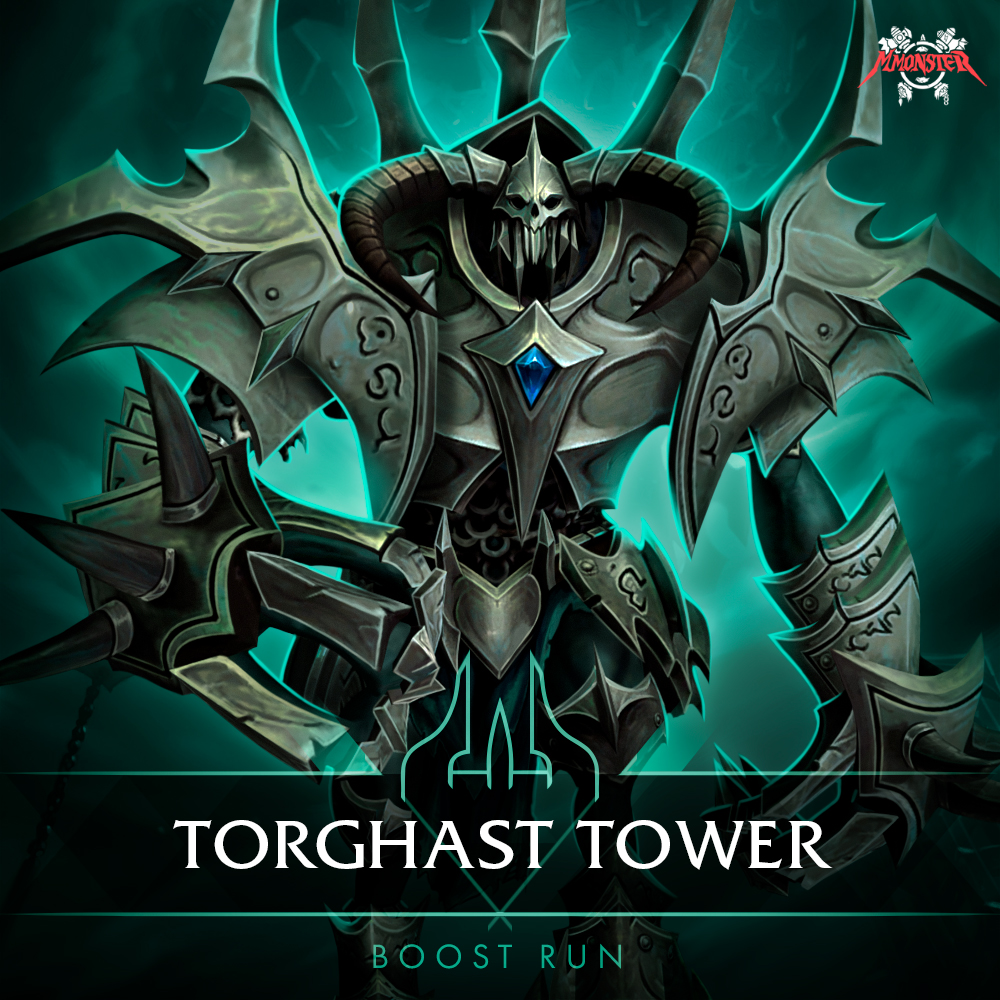 Here you can buy Torghast, Tower of the Damned Challenge Boost to obtain any amount of Soul Ash and Soul Cinders required to craft Legendary Gear and other cool rewards

orghast Tower is located in the heart of the Maw and is the place where Jailer holds his most powerful souls. Every time a player enters Torghast, he will encounter new challenges in his way: dynamic wings and changing floors flooded with horrific creatures roaming the corridors, getting stronger as you progress towards higher levels of Torghast. The Tower is designed as dynamic content for either solo players or groups up to 5 players scaling everything accordingly. Torghast has 6 wings total: Coldheart Interstitia, Skoldus Hall, Mort'regar, Soulforges, Fracture Chambers and The Upper Reaches with only 2 of them active at a time during one weekly reset and rotating every week. Each Wing has 12 Layers and each Layer has 5 Floors with different encounters, mobs, puzzles, rares and main boss waiting for you on the last floor of each Layer. As soon as you enter Torghast, you won't be able to change your spec, talents and gear because of The Jailer's Chains debuff making the challenge more interesting and relied on your skill. This can be countered by a special zone called Refuge of the Damned found at the entrance of 3rd and last Floor of each Layer. The higher the Layer and Floor number, the harder enemies and encounters get introducing new Torments mechanics which become stronger as you advance to higher floors empowering mobs and bosses and weakening player(s) making the run more challenging. Additionally, during the run you will encounter lots of new and interesting mechanics and activities such as collecting Phantasma, which unlocks some new features, improving your powers and altering your playing experience every time you make a Torghast Challenge Run. Secondly, you can find Soul Remnants scattered through Torghast which you can set free and gain powerful buffs until the end of Torghast Tower run. You will also gain Anima Powers by collecting Anima Orbs randomly spawned in Torghast and can be looted in phylacteries, or for killing rare or empowered mobs etc., which increase player's power within the Torghast. Lastly, Chains of Domination patch brings 2 new systems. One of them is The Box of Many Things, which is a new Talent-based system to improve your Torghast experience, which you fill up with the help of Tower Knowledge currency earned from making Torghast runs. And second is the new Torghast Scoring System which arrived to replace death counter system (it's gone!). This new system will determine your progression in Torghast, as now you will need to reach certain amount of score to unlock the next Torghast layer. The score is based on completion %, completion time, Empowered Bonus and extra points.

very new player will have to complete a lot of Torghast Tower Runs because it is the only source for Soul Ash and Soul Cinders currencies which are required to fuel Runecarver's Chamber and craft your own Legendary Gear, greatly improving your character's powers. Soul Ash is obtained for completing Torghast Layers on 1-12 Levels in any available wing. Soul Cinders currency is obtained for completing Torghast Layers on 9-12 Levels in any available wing. Starting from WoW Shadowlands patch 9.1.5 the system doesn't have a weekly cap anymore as you will get the same amount of Soul Ash and Soul Cinders for completing repeated Torghast runs. Completing higher Layer will automatically grant player all Soul Ash and Soul Cinders from previous Layers meaning that each player will need to complete 2 highest Layers in both Wings during the weekly reset to get Weekly Cap. You will also need a good skilled party or high gear to accomplish the highest possible layers of Torghast to get maximum amount of Soul Ash and Soul Cinders in order to not fall behind in progress and craft all necessary Legendary Armor of highest Rank possible, which sometimes can be hard and time consuming task. Additionally to that, there are some cosmetic rewards which can be obtained during the run if you are lucky enough. And for those of you who seek the hardest challenge, there is a new meta-achievement added in Chains of Domination patch called Flawless Master which requires you to complete a Flawless clear of all 6 Torghast wings on Layer 12 rewarding the bravest ones with new unique mount Mawsworn Charger's Reins. Please note that during the first few weeks of Chains of Domination patch Torghast will be time-gated with only limited amount of layers available to complete.