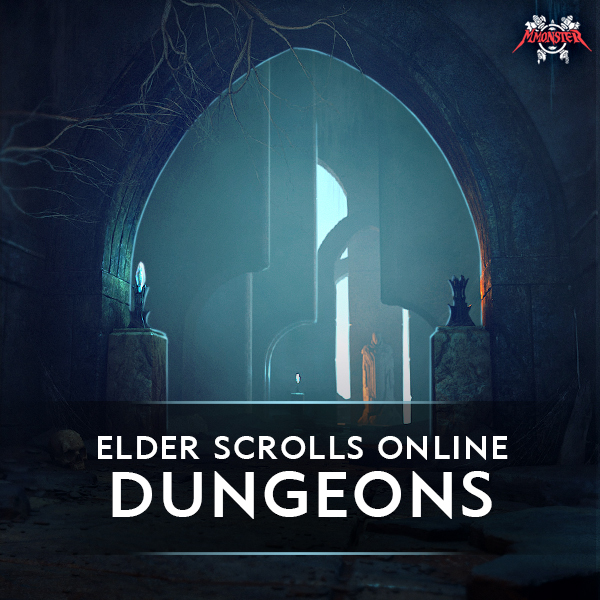 n The Elder Scrolls Online, dungeons are four-player activities that require teamwork and coordination to complete and offer unique rewards not found anywhere else within the game. Unlike delves (smaller one-man dungeons that can be found in each zone), dungeons generally require a team of two damage dealers, one tank, and one healer. In is generally because while it is advisable to have a team made up of these core roles, it is possible to complete some dungeons with a more varied group, depending on the levels and skills of the players in question. It is even possible to complete a dungeon solo! Dungeons in ESO feature large groups of enemies that are tougher to defeat than those typically found in overland content along with multiple bosses. Bosses in dungeons represent unique challenges, as they often feature special mechanics that need to be managed by the whole group. In dungeons, each boss typically drops a unique set item (with there being three unique sets per dungeon) and other rewards that can't be found anywhere else. Each dungeon usually has a quest and achievements associated with it that reward you with a Skill Point, too. Most zones in ESO have at least one dungeon, and some dungeons even have more than one version!

ome dungeons are more difficult than others, depending on several factors. For example, dungeons in the early zones (such as Fungal Grotto in Stonefalls) can be completed by a relatively low level, inexperienced group. Note that while you can walk into a dungeon at any level, we recommend you reach level 10 before starting dungeon content. Later dungeons tend to be more difficult, with this being especially true of the dungeons found in the DLC game packs such as Shadows of the Hist or Imperial City. In addition to this, many dungeons also have a second version that continues that dungeon's story and features new monsters, new bosses, and higher difficulty. This is indicated by the “II" next to the dungeon's title, for example, “Fungal Grotto II."

or a greater challenge, each dungeon can also be completed in veteran mode. Veteran mode is unlocked once you reach level 50 and increases the difficulty for the group by making the mobs and bosses even tougher. In turn, veteran mode dungeon runs reward players with better quality gear and unique achievements and collectibles. To take on a dungeon in veteran mode, select the veteran option in the Group & Activity Finder menu before entering the dungeon. You can also specify normal or veteran versions of a dungeon when queuing. Finally, when taking on a veteran dungeon, you can attempt to beat the final boss on hard mode. This will offer even greater rewards (and a greater challenge)! To find out the conditions for hard mode within a unique dungeon, check the Dungeons section of your Achievements menu (found within your Journal). To activate hard mode, some bosses only require you to activate a nearby scroll, while others require you to defeat the boss under unique conditions.

Dungeon Runs Carry: how the service will be carried out

After placing the order we will contact you to start boost service process. In case of Account Sharing first of all we will need you to provide primary data, for account sharing (Login and Password), so our booster can receive access to your account. Second if there is needed, we will ask some additional information, if it was not yet provided from you before, like char name, time for account is available for boost or any other details, that you wish to clarify for us. After all preparation is done and we have all the needed info from you, in the nearest time our boosting member procceed to order completion. While process is going you always have the opportunity to receive info about progress, or to add some additional orders. When all the work is done we will inform you, so you can check all the work is done properly and complete.

How to complete Dungeons fast

Completing Dungeons in Elder Scrolls online is one of the most hardest challenge. When you going for normal dungeon, you always had your back, other players can just carry you out. Any veteran dungeon required well organized team, so better to complete it with friends, not randoms. We recommend first to get at least 160cp level. After that try to get middle play epic gear for your class. The nice bonus to your survivability also will be getting complete monster set for your char, this will significally rise your chance of completing dungeon nice and easy. Then watch at least one guide, so you know the basic mechanics of bosses, or if you brave enough, just jump into Normal version to test out your skills. Once you have done dungeon on normal try to keep up and progress it more. After you get level 300-400cp, upgrade at least your weapons to legendary - and you are ready for conquering Veteran. And don't forget your food and extra potions - this will help you a lot. Last tip - easiest class for completing dungeons is magicka Sorcerer with pets. Good luck!

Our service designed to greatly save your precious time and nerves, so you don't have to stuck on some boss or suffering from another random group, that don't know simple mechanics. We make all process fast and safe, so in the result of our professional ESO boost you will receive all that you wish, as well as some additional loot and other bonuses, that your hero will get during the boost performance. Our guys are the best boosting team with great helpful players and our support is there to answer your questions and assist you anytime you need it. While boosting we can provide you screenshots of current progress, if needed. We make any existing ESO carry services available for the best price! Try MmonsteR boost service and you will have your in-game helper from this moment on!