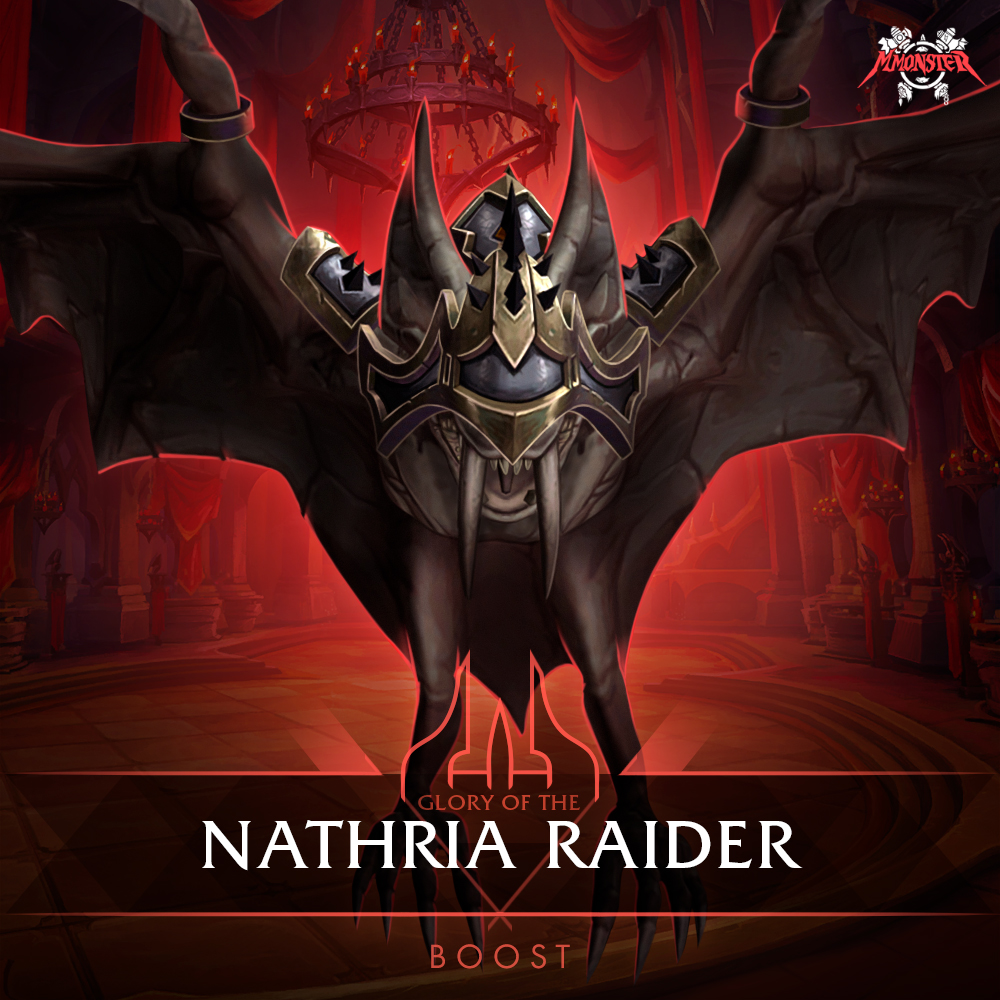 Glory of the Nathria Raider

astle Nathria is a gothic castle with high spiers and towers located in the heart of Revendreth where its ruler, Sire Denathrius, reside. Castle Nathria is the first Shadowlands raid where players will join Prince Renathal's forces to face 10 powerful bosses and remove from power their venthyr master betrayer Denathrius. Castle Nathria normal raid is released on December 8 in US region and on December 9 in EU region, in 2 weeks after new Shadowlands expansion hits live servers on November 24. The raid is available in 4 difficulty modes: LFR, Normal, Heroic and Mythic and consists of 4 wings with mostly linear structure, but you will have to kill several bosses on different steps to move further into the raid. Join this epic adventure alongside with our best boosting guilds, be the one of the first to get Glory of the Nathria Raider meta-achievement and have the best gaming experience and pastime you have ever had!

lory of the Nathria Raider is the new raid meta-achievement from the first Shadowlands raid calles Castle Nathria, which arrives in 2 weeks after new Shadowlands expansion hits live servers. To earn the acvhievement players have to face and kill all 10 bosses in Castle Nathria raid performing a variety of conditions and completing unique tasks in order to get required achievements on each boss to get the ultimate reward - Rampart Screecher flying bat mount. This Glory achievement is done in Castle Nathria Normal raid, which has a weekly lockout and drops 200+ item level loot which can have a socket on them. So what are you waiting for? Get yourGlory of the Nathria Raider boost today and watch your character collects all those tasty rewards and tremendously grows in power!

All Glory of the Nathria Raider rewards - buy the boost, enjoy the loot!

ven if you are an experienced player with the best pre-raid gear, Glory of the Nathria Raider will still be a tough challenge for you as you need to perform 10 specific achievements during the completion of Castle Nathria Normal raid. However, the rewards you will get for completing the glory achievement are really high: along with the best 200 / 207 item level raiding gear with top stats, which can also be socketed powering up your character even more, and Rampart Screecher Mount as the ultimate reward for completing this meta-achievement, you will get Castle Nathria achievement, chance to obtain Conduits for your Covenant Soulbinds customization, Memory of the Runecarver recipes to unlock Legendary Powers in Runecarver's Chamber, chance to obtain Portable Pocket Dimension 32 Slot Bag and much more. There are no special requirements to buy Castle Nathria Normal boost other than 60 level of your character (you can order Shadowlands Power Leveling Boost at our store). You can buy Glory of the Nathria Raider boost run with account sharing or selfplay. Our professional and trusted Mmonster players will kindly boost your character with this Shadowlands Glory of the Nathria Raider boosting carry service really fast so lean back and enjoy rewards.

uy Glory of the Nathria Raider boost service from the safest and most reliable boosting service on both EU and US regions, join the most epic raid in Shadowlands, clear all 10/10 Normal difficulty bosses, get your unique Rampart Screecher flying mount in no time and stand out from the crowd! Account Sharing option is your best bet if you just want to save your time, especially for Normal raids during first weeks after raid's release and selfplay option is always available for you also if you want to participate in Castle Nathria raid and get the most epic gaming experience yourself. Just save yourself lots of time and skip unwanted boring wipes by using our Glory of the Nathria Raider boosting carry service with our professional and skilled players.

Got my rampart screecher mount just as promised in less than 2 hours after boost started, top team