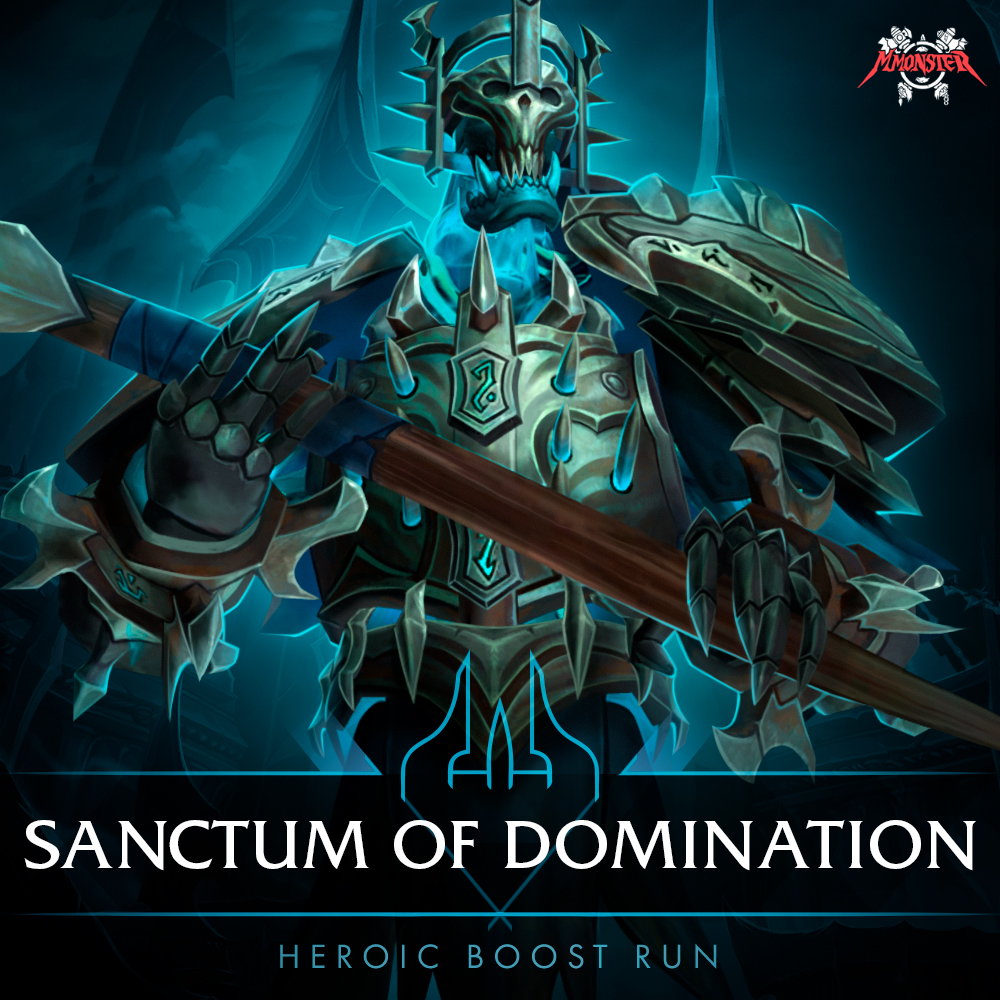 Here you can buy Sanctum of Domination Heroic Boost run to get some cool 239/246 item level raiding gear and other rewards fast and easy. Please note that during the first raid weeks there may be wipes, delays and increased waiting times.

anctum of Domination is a new WoW Shadowlands raid located in Torghast where players will fight Jailer's forces and face 10 powerful bosses inlucding well known characters such as The Tarragrue, Remnant of Ner'zhul, mighty Kel'Thuzad and treacherous Sylvanas Windrunner as the final encounter. Sanctum of Domination heroic raid is released on July 6 in US region and on July 7 in EU region, one week after new Chains of Dominarion patch 9.1 hits live servers on June 29. The raid is available in 4 difficulty modes: LFR, Normal, Heroic and Mythic and consists of 4 floors with linear structure. Join this epic adventure alongside with our best boosting guilds, be the one of the first to get Sanctum of Domination Heroic Raid Run and have the best gaming experience and pastime you have ever had!

anctum of Domination raid on Heroic difficulty drops 239 item level gear (246 item level from two last bosses) with the Maw themed weapons and armor as loot rewards for killing bosses. There is also new The Great Vault feature introduced with Shadowlands release which is an upgraded version of previous Weekly Chest, but this time you can get your guaranteed weekly reward for killing bosses in Sanctum of Domination raid. Item level of reward from the Great Vault will be equal to item level of loot dropped from Sanctum of Domination heroic raid - 239/246 item level (you will need to kill 2 last bosses in Heroic raid for a chance of 246 item level item to appear). You can also unlock additional items (up to 3) to choose from by killing more bosses in a raid giving you more choice and chances to get the desired item, but still you can pick only one guaranteed weekly reward from the the Great Vault. Depending on amount of bosses killed during the week you will unlock following rewards to choose from in your Vault:

Raid with Personal Loot option means that quantity of items you will get fully depends on your luck, which we wish you most of all :) You will get all 239/246 ilvl loot for your character's chosen class and spec including socketed items which may drop for you personally during the run.

In case you choose additional loot option (X Loot) selected amount of players of the same armor type will be assigned to you (you will know beforehand at which group number are your assigned players) and trade you all 239/246 ilvl loot for your character's chosen class and spec. Items which drops for you personally and items, which are not an upgrade for your character, count towards minimum guarantee, however double items (2 items in a same item slot) don't. In case of a bad luck of not getting minimum guarantee we will make another loot run for your character to get remaining items next week absolutely free.

Number of items guaranteed depends on a loot option you choose, check out our loot table:
*information provided applies to 10/10 Sanctum of Domination Heroic boost run

Bosses included in your Sanctum of Domination Heroic Run depending on your selected Boost Run option:

There's one limitation with common Shadowlands loot system in which only items with lower item level than the ones player already has in the same item slot can be traded. Despite this, we guarantee that all of your assigned players will have higher item level than the basic item level of items dropped in this raid (239) and will be able to trade you 99.9% of items they get. Please note that BOE items can not be traded. Minimum loot guarantee applies to 10/10 Sanctum of Domination Heroic boost runs only, we can not guarantee this amount for lesser bosses runs.

Sanctum of Domination Heroic Boost is a new Sanctum of Domination raid run to kill all 10 bosses on Heroic difficulty with our top payers where you can get some cool 239/246 item level raiding gear and other rewards fast and easy.
Doing Sanctum of Domination Heroic Raid can be time consuming and may require a lot of effort and skill from you and/or your team mates. Our professional players are well trained and suitable for any task. They are constantly learning and improving their gaming skills in order to save you a lot of time and help you skip unwanted struggle so you can immediately start reaching your in-game goals, win rewards and enjoy your gaming time.
You can read about all relevant rewards you will get by completing the boost under the Service Includes tab. If the service is more complex and have some advanced options structure with a lot of additional rules and conditions, please also learn Service Details/Loot Run info tab (if any available) or extra option notes (under the "?" mark) to find out exactly what you are entitled before purchasing a particular service and/or extra option.
Only when it's possible, our managers will appoint your gaming sessions and define time frames when the account will be available for you to play. Please understand that our players schedule their gaming sessions on your account beforehand and plan the boosting process to accomplish your boost in most efficient way. Interfering in the boost process and non-compliance with the schedule will result in extended terms of boost completion. Also, keep in mind that logging in to the account when other player already logged in can compromise its security. In that case we won't be able to hold responsibility for any unwanted consequences.
In case we need to share your account with our booster for the boosting service, our support manager will contact you for the login details. Then he will pass your login details to your booster who will type them in to the game client or launcher to enter your game account. Depending on security settings you have at your game client or launcher you will be required to provide our support manager with a security code from an email, sms or 3rd party authentication device or app to successfully authenticate our booster's login to your account.
You can learn all the requirements for the boost under the Requirements Tab. If it is stated that requirements are various and hardly dependant on lots of factors, please contact our support managers and they will gladly help to analyze your character and advise on the following steps to meet the requirements or offer an alternative service which will give the same or similar result.
You can check your boost progress status on your MmonsteR website's Order page under the Status line. You can also ask our support managers to get your boost's status update, more precise info like estimated completion time and your booster's operating hours. Please note that sometimes due to increased workload it may take some time to process your request. You may also leave a feedback of our boosting service during or after the boost so we can improve and provide you with a better experience next time you use our service.
We cooperate only with qualified and experienced top world players who participate personally in each event, providing most relevant services. Currently we have more than 8000 satisfied customers, 70000+ completed orders and 6000+ positive reviews proving our flawless reputation as one of the best boosting services on the market. MmonsteR is officially registered in Germany (GmbH) so you can trust us with your money. We guarantee your privacy, account's safety and secure payments using the most reliable payment providers while bringing you top-notch service and flexible approach with best care possible. Every single service is done by hand and only through legit gameplay. We track all services in real-time and ensure that no third-party software or scripts are being used.

Ordered SoD heroic boost with X5 Loot. The group was amazing, the run was finished in 2 hours, got 8 items, pretty happy!