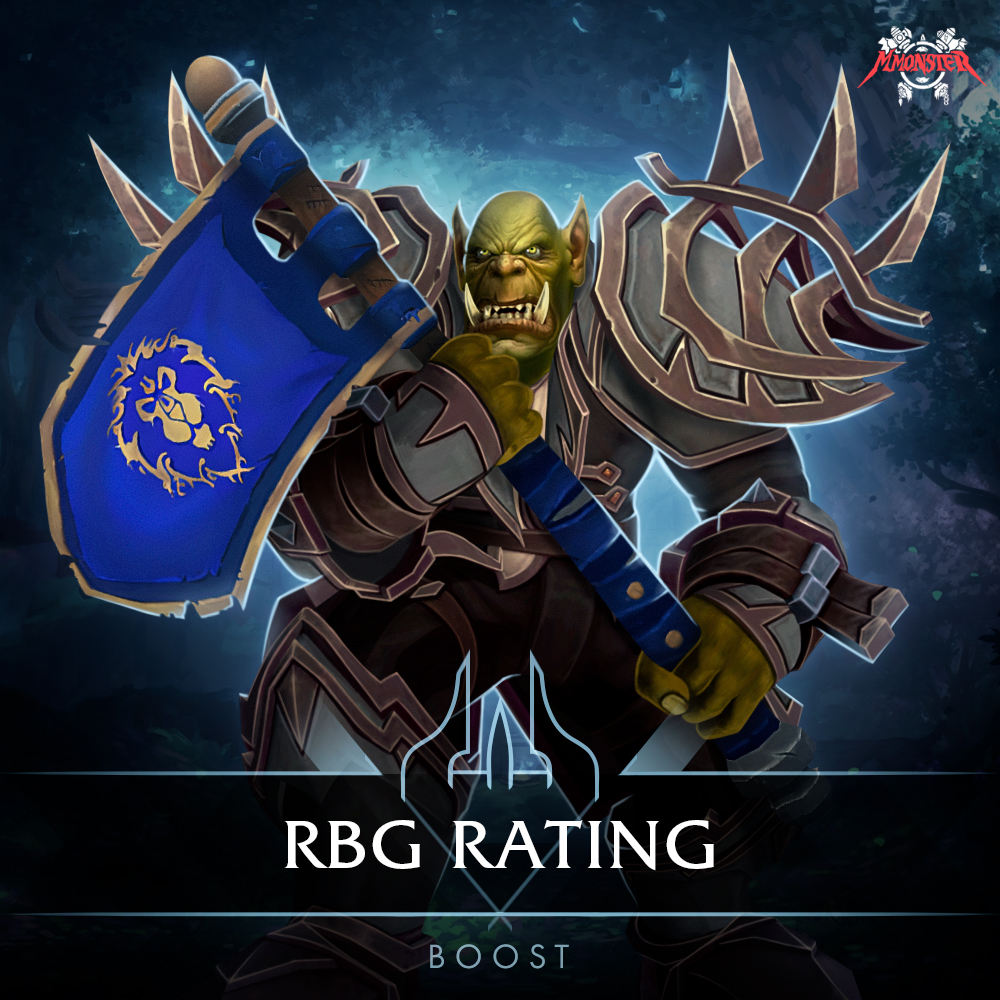 Here you can buy RBG Rating Boost Carry service to obtain desired Rated Battlegrounds rating. Due to the heavy workload of our pvp boosting teams there are waiting queues for RBG rating boost to start. Estimated Boost Start time can be up to 2 weeks

ated Battlegrounds (RBGs) are the most prestigious places of all Horde and Alliance players to fight for their faction and compete to get higher in rating ladder. Only the strongest teams can reach the highest ratings which reward Conquest points to buy elite epic gear (which can be on par with relevant Mythic Raiding gear), unique titles, cool Feats of Strength achievements and other rewards. Participating in Rated Battleground games will have your Rating gained or lost every match depending on the outcome of the game. By reaching specific RBG Rating points you will get respective Rank with such cutoffs in Shadowlands Season 2:

ighest earned rating determines which item level of PvP gear is available for purchase at Conquest Vendor and as weekly reward from the Great Vault, which Elite set transmog gear pieces are unlocked and which titles/FoS achievements you get. The more rating you get, the better rewards you collect, that's an easy rule! Additionally to that, RBG content inherited the classic system of ranks, which are awarded for reaching appropriate RBG rating in the rated Battlegrounds:

inning games and reaching the highest RBG Rating is not a trivial task and requires exceptional playing skill, experience, effort and time not only from you, but from all your team mates. And with our RBG Rating Boost service you won't have to face all these trials alone, as our top pvp players are ready to provide you with the best and the most effective way to get your character desired RBG rating, pvp gear and other rewards fast and easy. So what are you waiting for? Join our pro boosting team, crush your enemies while winning Rated Battleground battles and claim your ultimate rewards!

ven if you are an experienced player with the best gear, climbing Rated Battlegrounds ladder and winning RBG games on high rating will still be a tough challenge for you, however, the rewards you will get for reaching the highest Ranks are really high. Depending on your earned Rating you will get lots of different rewards, such as Feats of Strength achievements, unique titles and guaranteed 233+ item level item as a weekly reward from The Great Vault as well as item level of PvP gear from the conquest vendor upgraded and Elite Gladiator gear set pieces unlocked for purchase etc. Here are all the rankings a player can earn in Shadowlands PvP Season 1 and their respective rewards:

dditionally to that, you will get a bunch of Marks of Honor which you can exchange for old season PvP tier sets or weapons, heirlooms and pvp mounts, lots of Conquest Points and Honor Points farmed during the boost required to purchase and upgrade your PvP gear from Honor and Conquest vendors, Honor Level boosted along the way, tons of Anima to fuel your Covenant Reservoir or to buy some cool Covenant rewards and filling PvP progress bar towards Seasonal PvP mount reward (Vicious War Gorm in Shadowlands Season 2) or Vicious Saddle (if you already obtained your Seasonal PvP Mount) which can be exchanged for one of the Vicious mounts from the previous expansions. Our professional pvp boosting team consists of several multi-ranked 1 Gladiators with huge experience in providing the fastest, most secure and reliable service so you can be sure you will achieve your desired RBG Rating in no time. There are no special requirements to buy RBG Rating Boost Carry other than 60 level of your character (you can order Shadowlands Power Leveling Boost at our store) and specific item level gear of your character mentioned in the Requirements tab. We also guarantee complete anonymity and reliability of our PvP boost services. You can buy RBG Rating Boost Carry as a selfplay service only. Our professional and trusted Mmonster players will kindly boost your character with this WoW Shadowlands Season 2 RBG Rating boosting service really fast so lean back and watch your character climbs the competitve PvP ladder and tremendousely grows in power!

Check our table to know the approximate time of your RBG Rating boost completion: